skip to main | skip to sidebar

Not My will but Thine

Resurrection Day is almost upon us.  I love this season.  My thoughts ponder the greatness of our Savior's love for us.  To think that God the Son was willing to leave the portals of Heaven and walk among us as a man and to take our sin upon himself is amazing in its scope.  Jesus, both fully God and fully man, made a choice that would change our lives forever.


Christmas recounts His entry into our world.  The willingness of Mary and Joseph to take on what could arguably be considered the greatest assignment ever given to human parents gives insight into the Father's faith in their ability to instill the same total surrender to the Father in Jesus on a human level.  Mary was told she would have a child as a virgin who would save His people from their sin, Joseph was told to go ahead and take Mary as his wife and raise the child...the Messiah of His people.  Mary told the angel, "Be it unto me as you have said."  Joseph obeyed and took Mary as his wife.  These acts of obedience were not easy at all.  Mary faced potential death or at least scorn of those who would never understand or believe that God had called her to bring forth the Messiah.  Joseph would be looked upon with pity by those who think he was duped into a marriage with a young woman who didn't deserve him.  Their willingness to obey was the basis of God's ability to trust them in the raising of the Christ child.

The garden prayer of our Savior reminds me of Mary's statement.   He said,  "Not my will but thine".  Jesus was willing to obey the Father.  The road ahead, though planned from the foundation of the world, was not an easy road to walk.  His prayer was urgent...those he loved slept around him and one even betrayed Him.  The pain involved in the way He would died was emense, but the taking on of our sin and being the spotless lamb is what made Him different from anyone else who died on a cross.  "Not my will but thine" , he said...echoing Mary's words as a young woman, "Be it unto me as you have said."

Father God may we as a people, and as believers have a mind that declares...."Be it unto me as You have said, Not my will but thine".  We love you Jesus.
Posted by Ruth at 10:51 PM No comments: Links to this post

God's Love: While we were yet sinners.

Romans 5:8  "But God demonstrates his own love for us in this: While we were still sinners, Christ died for us." NIV

John 3:16 16 “For God loved the world so much that he gave his one and only Son, so that everyone who believes in him will not perish but have eternal life." NLT

As we start the study of God's love lets look at these familiar verses.  God shows His love in these verses in two ways.  First He loves us before we accept Him as Lord and King, before we are changed by His power and transformed by His light.  He is our creator and could require our aligence through sure might, but instead He desires willing love, and willing fellowship.  He loves us even when we don't love Him.  He loves us even when we ignore His existence.  He seeks to draw us to Himself, but He never usurps our will.  He paid the price of salvation even before anyone accepted Him.  Secondly God the Father gave Jesus  God the Son to us as gift so that we would have a way of Salvation.  He sacrificed because He loved us before we ever made a move toward Him.

I want you to understand God loves you just as you are right now.  Many may be upset at that statement because they think you have to be perfect to receive God's love.  God loves people even when  they still have some stains and disobedience.  I didn't say Jesus wants us to stay as we are..(in fact even if you've been saved for 20 years you still have things Jesus is working on in your life) He surely will help us and He will transform us as we renew our mind to the Word of God.  He does however, love us right now mistakes, shortcomings, faults and all.  He doesn't wait until we've gain a level of goodness...He is our righteousness.  He doesn't wait for us to have our life all together perfect.  He loves us now.  Say that out loud.  God loves me.  I'm not perfect, I still have a ways to grow in Him...but He loves me now.
Posted by Ruth at 9:21 PM 1 comment: Links to this post

"Jesus loves me this I know for the Bible tells me so"  Most Americans know this little song even if they do not know Jesus as Savior.  Over the next few weeks I'd like to share some Scriptures which assure us of this fact.  We can know this in our head, but have reservations in our heart.  Let's take some time to look over some amazing Scriptures to bring Father God's love for us into our reality so that we cannot be shaken when things happen that we don't understand, when we make a mistake or even when we outright fail, when we are walking our daily journey in this life.  We all want to obey God and love other people...and that is good...but we can't give what we don't have....we must soak in His presence and begin to understand we have a God who loves us so much and that He can be counted upon to always love us.  Today...Simply sing the little Song Jesus loves me.  Here is one more song that assures us of His love.  O How He Loves Us.
Posted by Ruth at 10:24 PM No comments: Links to this post 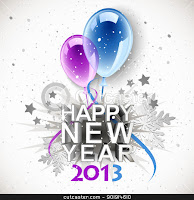 A look at 2012 reveals a year of trail and restoration.  We've experienced and heard about folks that have went through the storms of life and yet have hung on to the hand of God with an expectant hope.  It has been a year that threatened to steal hope from our nation (and for that matter people of other nations) and our people.  It has also been for many a year in which that  which was stolen from their life has begun to be restored.  We are coming upon a year where God will show forth His mighty hand while the enemy continues to whisper to our spirit that we are alone and hopeless.  We must listen to the voice of God and shut out the voice of the enemy.
This year expect to see the goodness of the Lord.  Remember that he loves you with an everlasting love that cannot be stopped.  He even knows the number of hairs on your head, he holds you in the palm of His hand.  His plans for you are for good.   Love Him with an expectant heart.  Say with Paul, "that I may know Him and the power of His ressurection, and the fellowship of his sufferings..."  Do not allow the enemy to steal  your joy and expectancy.
﻿

Posted by Ruth at 10:50 AM No comments: Links to this post

Promote Your Page Too